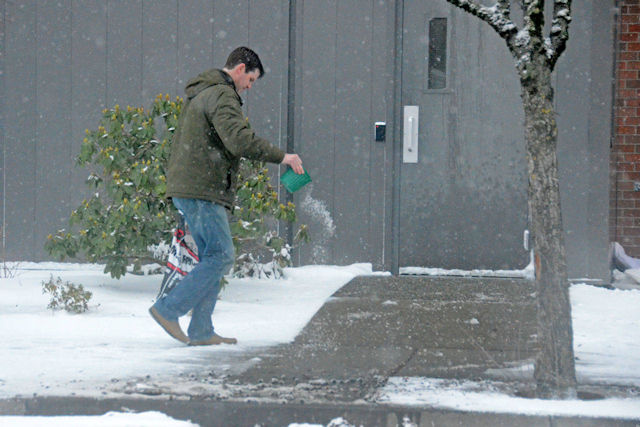 In its recent opinion in Hussey v. Chase Manor Condominium Association, the First District Appellate Court of Illinois addressed the question of what constitutes a “sidewalk” under the Illinois Snow and Ice Removal Act (the “Act”).

The Act is intended to encourage owners and others to remove snow and ice from sidewalks abutting their properties and contains an immunity provision that provides as follows:

“Any owner, lessor, occupant or other person in charge of any residential property, or any agent of or other person engaged by any such party, who removes or attempts to remove snow or ice from sidewalks abutting the property shall not be liable for any personal injuries allegedly caused by the snowy or icy condition of the sidewalk resulting from his or her acts of omissions unless the alleged misconduct was willful or wanton.”  745 ILCS 75/2 (emphasis added).

In Hussey, the plaintiff, Rita Hussey, slipped and fell on a patch of ice in the rear of her Chicago condominium building on March 15, 2014.  The area where the plaintiff fell was primarily used for parking vehicles but was also used as a walking path to access the building’s laundry room, basement and utility room.  A day or two before the incident, following a heavy snowfall, the condominium association directed the man they hired for snow removal to plow the snow in the rear of the building.  He did so and piled the snow against the rear of the building.  The plaintiff estimated that the pile of snow was around 5 ½ feet high.  The rear area had a downward slope, so the pile of snow against the building’s wall was above the area where the plaintiff fell.  As the plaintiff was walking through the rear area to the laundry room, she slipped and fell on a patch of ice near the building.

The plaintiff filed a complaint for negligence against the condominium association (both directly and for the acts of its agent, the man who removed the snow) as well as the condominium association’s management company.  The plaintiff’s theory, which was supported by an expert affidavit, was that the snow pile melted when the temperatures warmed; following gravity’s course, the melted snow travelled downhill onto the parking-lot pathway; the temperatures dropped again, causing the water to re-freeze; and, thus, ice formed on the parking-lot pathway.

The defendants moved for summary judgment, arguing that they had immunity under the Act for removing or attempting to remove snow and ice from “sidewalks abutting the property.”  The trial court agreed and entered summary judgment in their favor.  The plaintiff appealed.

On appeal, the First District identified the issue on appeal as: what the Act means when it immunizes snow-removal efforts on “sidewalks abutting the property.”  The First District analyzed a number of prior appellate court cases arriving at differing and contradictory results and ultimately found that the area behind the building where the plaintiff fell did not meet the Act’s definition of a “sidewalk abutting the property.”

First, the First District noted that the Act was in derogation of the common law.  Consequently, the Act (and its immunity) must be strictly construed to avoid eliminating by implication a body of common law claims.

Finally, the First District noted that, while one might use the word “sidewalk” in a colloquial sense to refer to a paved walkway on private property leading to a house, the Illinois General Assembly has always used “sidewalk” as a term of art (as have the courts interpreting that word) in contexts outside the Act.  In such other contexts, the First District noted that the term of art “sidewalk” has always referred to public, not private property.

Consequently, the First District reversed the trial court’s entry of summary judgment in favor of the defendants and remanded the case, writing: “We do not read the phrase ‘sidewalks abutting property’ of a residential landowner as including walkways on private property.  We read the phrase as limited to the municipal right-of-way, the part of the public street reserved for pedestrian use that abuts private residential property.  Thus, regardless of whether plaintiff’s accident occurred in a ‘parking area,’ a walkway or pathway on private property, or a hybrid of both, it did not occur on a ‘sidewalk’ within the meaning of the Snow and Ice Removal Act.”