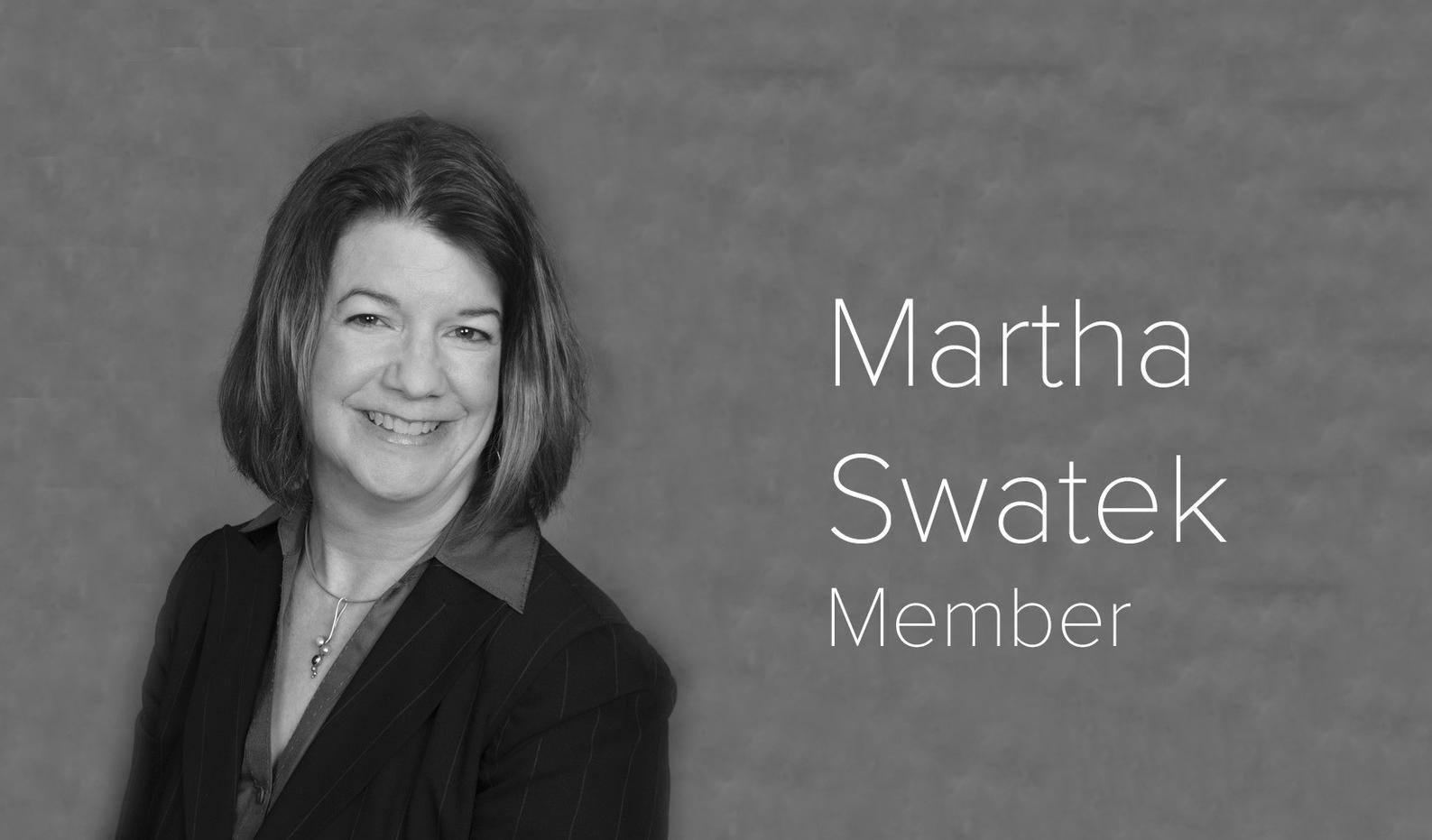 Marty Swatek was selected as a Leading Lawyer in “Personal Injury Defense Law: General” by her peers in 2017, a distinction earned by fewer than 5% of all lawyers licensed to practice law in the State of Illinois.

Marty defends national and local retail establishments against premises liability claims and intentional torts. Her practice also focuses on the defense of physicians and medical groups in complex medical malpractice cases. Her ability to analyze the facts of each case has resulted in summary judgment being regularly obtained for her clients in areas as diverse as legal and medical malpractice, intentional torts, general negligence and premises liability, as well as numerous defense verdicts at arbitration and trial of cases involving medical malpractice, general negligence and intentional torts. Ms. Swatek has also been lead attorney on a variety of appellate cases and successfully argued to uphold the granting of a motion for summary judgment before the United States Court of Appeals for the Seventh Circuit in the case of Wilson v. McRae’s, Inc.

Ms. Swatek graduated from Northwestern University in 1988 and worked in the insurance industry for a year before entering law school. She received her Juris Doctorate, with honors, in 1992 from IIT Chicago-Kent College of Law where she was a recipient of the Lowell Thomas Scholarship. She is admitted to practice in the State of Illinois and as trial counsel before the United States District Court for the Northern District of Illinois. She is also admitted to practice and argue before the United States Court of Appeals for the Seventh Circuit. She is a member of the Kane County Bar Association, Defense Research Institute and the Illinois State Bar Association and is proud to be a member of the Council of Professional Advisors with the Community Foundation of the Fox River Valley. Ms. Swatek has also been a presenter on a variety of civil litigation topics, most recently for the KCBA on the topic of "Jury Research and Selection - Tactics & Techniques".

Her ability to analyze the facts of each case has resulted in summary judgment being regularly obtained for her clients in areas as diverse as municipality premises law, legal and medical malpractice, general negligence and intentional torts. 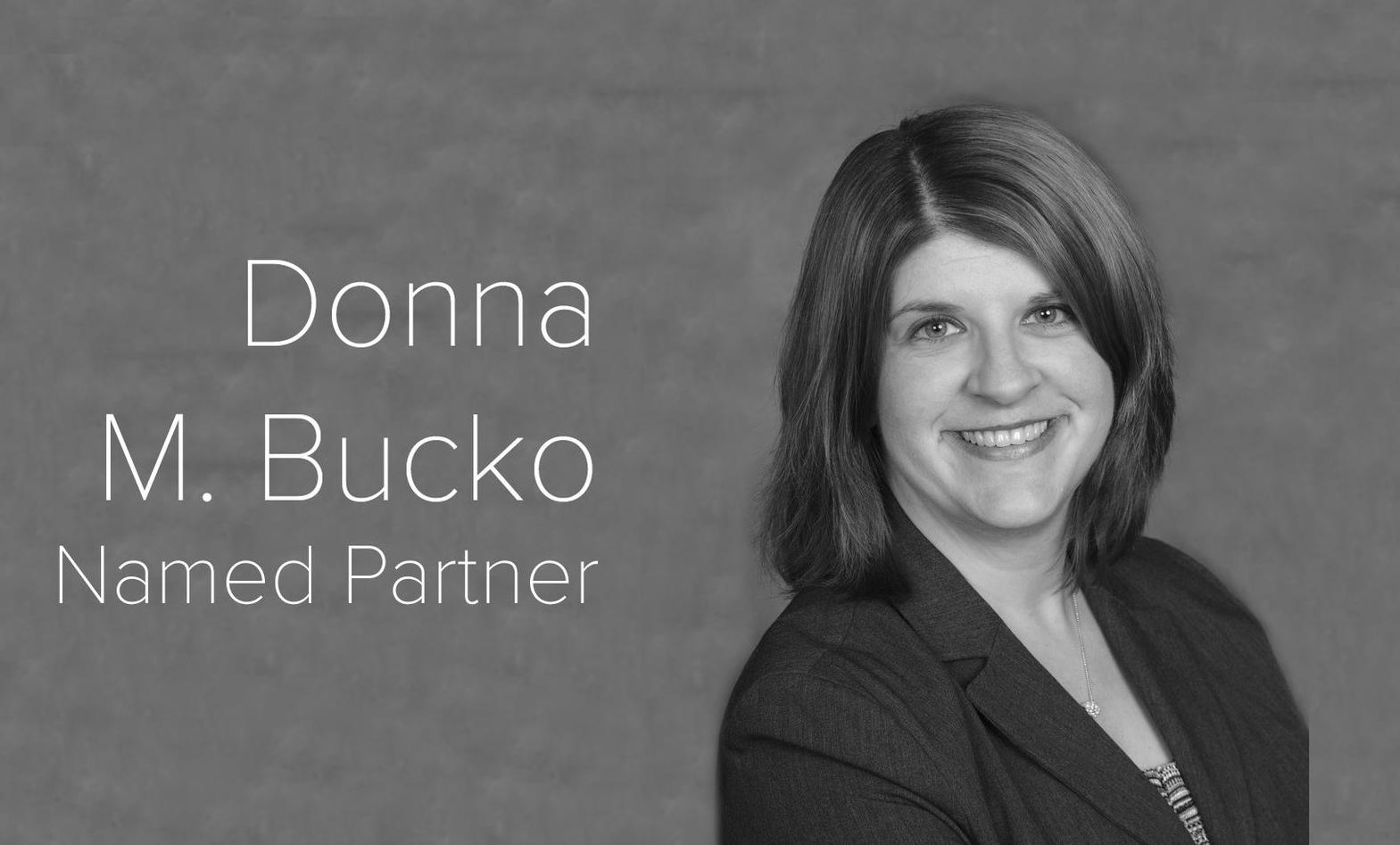 She previously prosecuted numerous bench trials on behalf of a local municipality. She has successfully obtained not-guilty verdicts in jury trials, bench trials, and at arbitrations. She has resolved cases favorably on behalf of her clients through mediation. She has obtained summary judgment for her clients on numerous occasions in the areas of premises liability and construction law. She has successfully had cases transferred to alternative venues pursuant to the doctrine of forum non conveniens for numerous clients. She is a member of the Kane County and Illinois State Bar Associations and is also admitted to practice before the U.S. District Court for the Northern District of Illinois.

Donna M. Bucko received a Bachelor of Arts degree from the College of the Holy Cross in Worcester, Massachusetts in 1999 and was admitted to the bar in 2003 with a Juris Doctorate from DePaul University where she was a recipient of the Rinella Family Law Scholarship. Ms. Bucko was on the Dean’s List in 2000 and 2001. During her tenure at law school, Ms. Bucko served indigent clients with her Illinois Supreme Court Rule 711 license at LifeSpan Center for Legal Services & Advocacy. 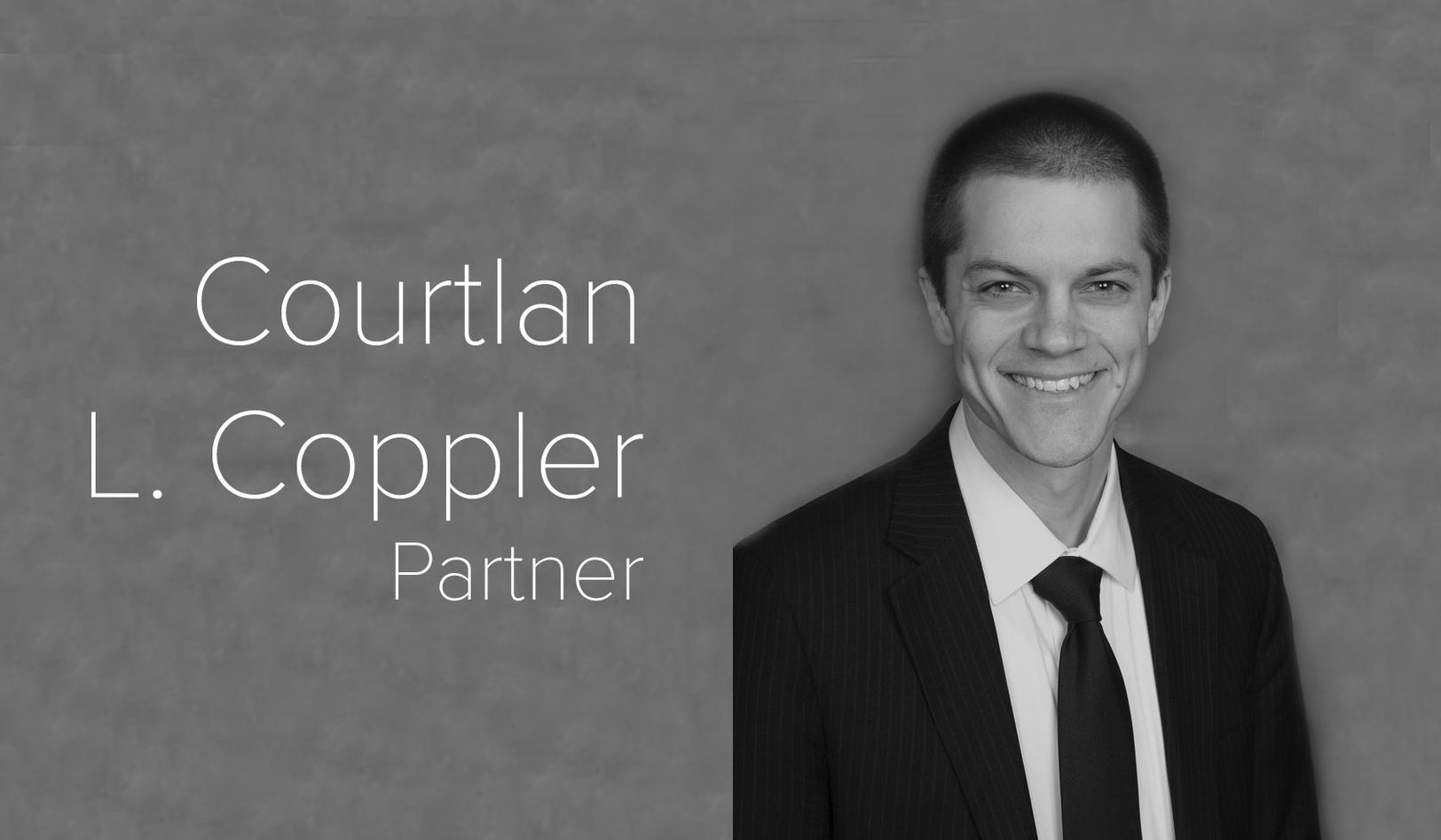 Courtlan L. Coppler practices in the area of civil litigation with an emphasis on construction litigation, insurance coverage litigation, and general negligence defense. He has represented contractors, real estate developers, condominium associations, and national retailers in a wide variety of litigation and transactional matters. He has extensive trial and arbitration experience, having tried numerous jury and bench trials and handled over one hundred arbitrations.

In addition to his litigation experience, Mr. Coppler has presented at the Illinois Institute for Continuing Legal Education (“IICLE”) Seminar on Condominium Law and is the former Chairman of the Chicago Bar Association Condominium Law Sub-Committee, which is comprised of many of the leading real estate development and community association law attorneys in the Chicago area. He is licensed to practice in Illinois and Indiana (Inactive) and is admitted to practice before the United States District Court for the Northern District of Illinois.

Mr. Coppler graduated from Hillsdale College in 2000 with a B.A. in English. He received his J.D. from Valparaiso Law School in 2003 where he was a member of the law review and the honors program and served as a legal writing teaching assistant. After his first year of law school, he served as a judicial extern for the Honorable Rebecca R. Pallmeyer, Federal District Judge for the Northern District of Illinois. In 2018, Mr. Coppler obtained an M.S. in Predictive Analytics from Northwestern University and brings a data-driven mindset to the clients he represents.

After 25 years of practicing at a mid-size defense firm, including 8 years as Managing Partner of 50 attorneys, Francis J. "Chic" Marasa founded The Law Offices of Francis J. Marasa, Ltd. in April of 2000. In March of 2011, the Firm was renamed Marasa Lewis.

With over 35 years of experience, Chic has defended both individuals and corporations in matters throughout the Midwest and prides himself on his ability to quickly assess the nature of a case, the potential for its defense and the evaluation of any exposure to his clients. Having worked in the construction field through college and law school, he brings a unique understanding of the nature of the construction industry to his legal work, which has grown into an expertise in all areas of construction management, including his knowledge of construction contracts and insurance coverage.

Chic strives to provide personal attention to each of his clients. He aggressively defends his clients in a respectful and well-prepared manner which has earned him the esteem of judges, opposing counsel and jurors. Chic has been awarded by his peers with the highest "AV" rating in Martindale-Hubbell. As an experienced trial lawyer with over fifty cases to verdict, many involving catastrophic injuries, Chic provides a wealth of courtroom experience which encourages opposing counsel to amicably resolve their lawsuits prior to trial.

Born and raised in the Wrigleyville area of Chicago, Chic is a lifelong Cubs and Bears fan and currently resides in Evanston, Illinois. Coming from a strong Italian-Irish background with both of his grandfathers in the construction industry, he prides himself on his ability to relate to not only his clients but also his opposition which continues to lead to favorable negotiations and settlements of disputed cases. 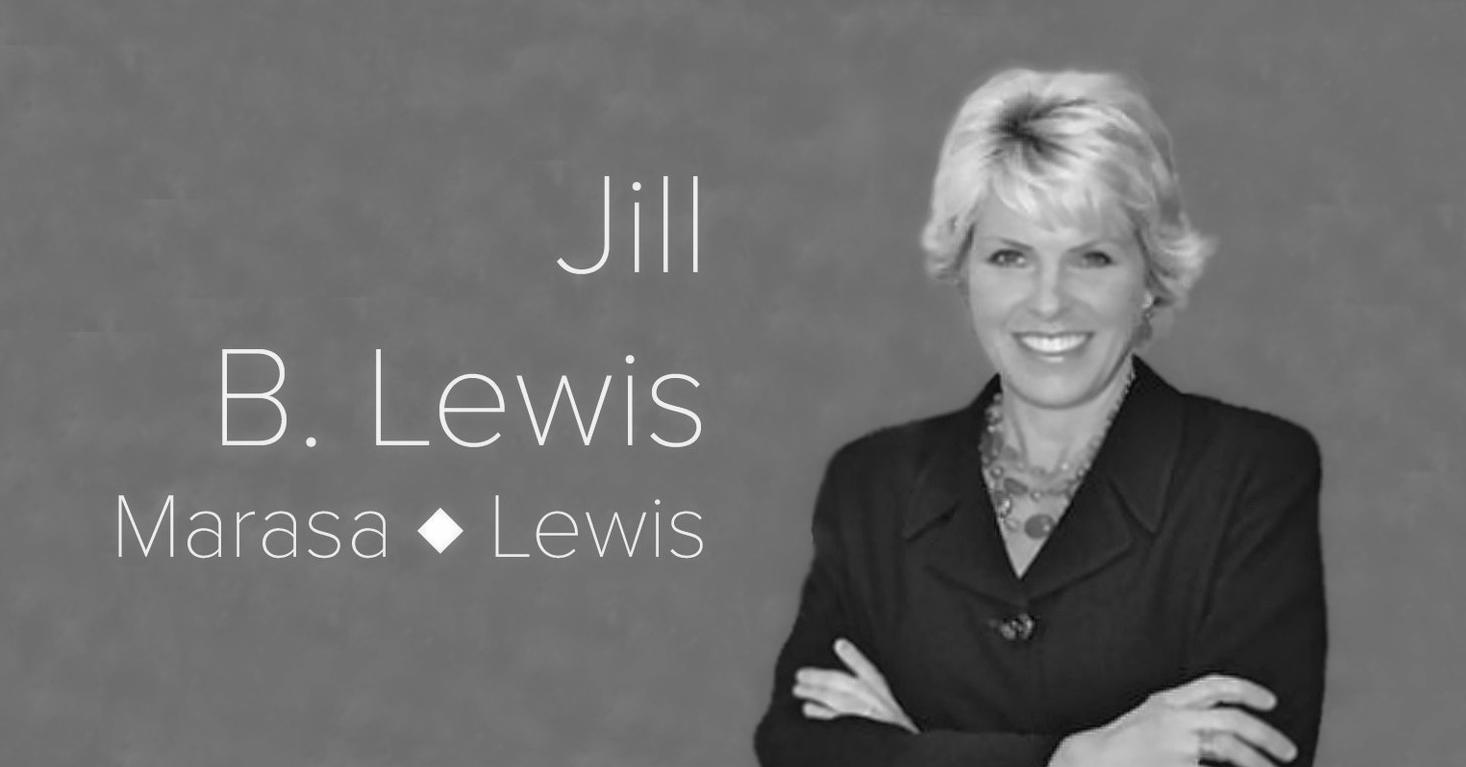 Prior to joining The Law Offices of Francis J. Marasa, Ltd. at its founding in April of 2000, Jill practiced at a mid-size insurance defense firm. In April of 2008, Jill became a Partner and in March of 2011, the Firm was renamed Marasa Lewis.

For more than 13 years, Jill's civil litigation practice has concentrated in the representation of individuals and corporations in a variety of tort-related matters, including general negligence, premises liability, construction negligence, motor vehicle negligence, and product liability. She has successfully litigated these matters through prompt and thorough analysis, effective pre-trial discovery, the creative use of dispositive motions, skillful settlement negotiations and trial preparation. Jill's litigation philosophy is to be assertive, yet approachable both in and out of the courtroom, fostering an amicable and speedy resolution of matters.

Jill also has extensive experience representing insurance companies in coverage disputes. As a coverage specialist, Jill is well-versed in all types of insurance policies, including commercial general liability, business auto and garage keeper's, and excess policies and their applicable endorsements. She counsels clients by offering a full spectrum of services, from providing coverage opinions to prosecuting and defending lawsuits in state and federal court.

Jill has handled a vast array of appeals in multiple jurisdictions, including the Supreme Court of Illinois. Her first-rate writing skills result in winning briefs and her command of the intricacies of appellate practice and procedures has allowed her to successfully argue appeals before the Illinois Supreme and Appellate Courts.

Jill was born and raised in Bloomington, Illinois. Following her undergraduate studies, she lived in Dallas, Texas and worked in sales for eight years before returning to Illinois for her graduate studies at DePaul College of Law. Jill currently lives in the Lincoln Park neighborhood of Chicago.